History of Tellington TTouch® in Slovenia 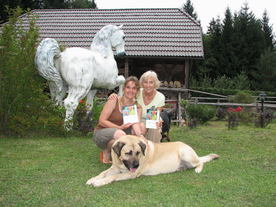 In 1993, Darja and Andrej Žnidaršič represented Slovenia on Equitana, the largest equestrian fair in Europe. At that time they also met Linda Tellington-Jones and were introduced to Tellington TTouch® Method. Darja and Andrej finally met someone who understood them. Darja was determined to present the method in Slovenia, due to extremely positive presentation and the effect of the method. Darja began to introduce the philosophy of method at Ranch Kaja and Grom to children who participated in various camps. Later on, she started to teach children the basics of the method.

Darja continued to teach the basics of Tellington TTouch® Method to children over the years. Later she began to introduce basics of method to adults as well.

Linda visited Slovenia three more times after 2001. She had two daily seminars in years 2009 and 2010. In 2012, she and head of the Animal Ambassador organization, Ronald Kleger, met the Prime Minister (now president of Slovenia) Mr. Borut Pahor. The topic of meeting was: The status of animals in Slovenia.